Read here about wire roap deployed as a tendon in tensegrity structures. For more general information on tendons, see tendon; for other materials, see Tendon, Materials.

Wire roap, or cable for mechanical applications, is commonly used as a tension element in tensegrity structures. In this article the terms are used interchangeably.

A cable consists of several strands of metal wire laid (or 'twisted') into a helix. Steel is the main material used for wire ropes. Wire roap may then be coated with a weather or moisture resistant coating, such as nylon (Steelon) or PVC.

Wire rope is preferred to pure steel for tension based construction for several reasons. Historically wire rope evolved from steel chains which had a record of mechanical failure. While flaws in chain links or solid steel bars can lead to catastrophic failure, flaws in the wires making up a steel cable are less critical as the other wires easily take up the load. Friction between the individual wires and strands, as a consequence of their twist, further compensates for any flaws. This method of minimising the effect of flaws may also be seen in Damascus steel, employing multiple folding or laminations. 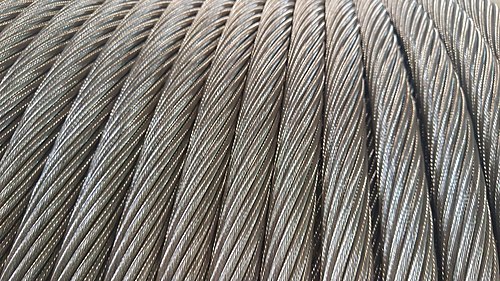 A wire rope clip is a U-shaped bolt with a special insert, specifically designed to clamp a wire rope to itself when forming a loop end for temporary cables.

Manufacturing a wire rope is similar to making one from natural fibres. The individual wires are first twisted into a strand, then six or so such strands again twisted around a core. This core may consist of steel, but also of natural fibres such as sisal, manila, henequen, jute, or hemp. This is used to cushion off stress forces when bending the rope. Such flexibility is not quite so essential in tension structure applications, as the wire roap is usually straight.

Wire rope is often sold with vinyl and nylon coatings. This increases weather resistance and overall durability, however it can lead to weak joints if the coating is not removed correctly underneath its connections.

The specification of a wire rope type -- including the number of wires per strand, the number of strands, and the lay of the rope -- is documented using a commonly accepted coding system, consisting of a number of abbreviations.

Some ropes have shaped or formed (triangular) wires to improve the wear and bearing properties of the outer layers (rather than circular drawn wire).

By having different lay directions of the strands and wire (left and right - also known as S and Z), it is possible to balance the torque value - resulting in a rope that does not tend to untwist when load is applied. This is called torque balanced or non-rotating rope.

The end of a wire rope tends to fray readily, and cannot be easily connected to plant and equipment. There are different ways of securing the ends of wire ropes to prevent fraying. The most common and useful type of end fitting for a wire rope is to turn the end back to form a loop. The loose end is then fixed back on the wire rope. Termination efficiencies vary from about 70% for a Flemish eye alone; to nearly 90% for a Flemish eye and splice; to 100% for potted ends and swagings.

A spelter is a type of cable fitting in which the strands of the cable are opened inside the fitting and molten lead is poured into the fitting to secure the cable. A clevis is a device used with a cable stud end or a threaded rod to form a pinned connection that is somewhat adjustable.

A turnbuckle is a threaded device used with cables or rods to allow adjustment.

When the wire rope is terminated with a loop, there is a risk that it will bend too tightly, especially when the loop is connected to a device that spreads the load over a relatively small area. A thimble can be installed inside the loop to preserve the natural shape of the loop, and protect the cable from pinching and abrading on the inside of the loop. The use of thimbles in loops is industry best practice. The thimble prevents the load from coming into direct contact with the wires. Thimbles are usually used with shackles.

A wire rope clamp, also called a clip, is used to fix the loose end of the loop back to the wire rope. It usually consists of a u-shaped bolt, a forged saddle and two nuts. The two layers of wire rope are placed in the u-bolt. The saddle is then fitted over the ropes on to the bolt (the saddle includes two holes to fit to the u-bolt). The nuts secure the arrangement in place. Three or more clamps are usually used to terminate a wire rope. As many as eight may be needed for a 2 in diameter rope. There is an old adage which has over time become the rule; when installing the three clamps to secure the loop at the end of your wire rope make sure you do not "Saddle a Dead Horse!" The saddle portion of the clamp assembly is placed and tightened on the opposite side of the terminal end of the cable. The US Navy and most regulatory bodies do not recommend the use of such clips as permanent terminations.

A swage is a type of cable fitting in which a sleeve fits over the outside of the cable and the sleeve is compressed around the cable to form a tight fit. The purpose of swaging wire rope fittings is to connect two wire rope ends together, or to otherwise terminate one end of wire rope to something else. A mechanical or hydraulic swager is used to compress and deform the fitting, creating a permanent connection. There are many types of swaged fittings. Threaded Studs, Ferrules, Sockets, and Sleeves a few examples. Swaging ropes with fibre cores is not recommended.

A wedge socket termination is useful when the fitting needs to be replaced frequently. For example, if the end of a wire rope is in a high-wear region, the rope may be periodically trimmed, requiring the termination hardware to be removed and reapplied. An example of this is on the ends of the drag ropes on a dragline. The end loop of the wire rope enters a tapered opening in the socket, wrapped around a separate component called the wedge. The arrangement is knocked in place, and load gradually eased onto the rope. As the load increases on the wire rope, the wedge become more secure, gripping the rope tighter.

Poured sockets are used to make a high strength, permanent termination; they are created by inserting the wire rope into the pointy end of a conical cavity which is oriented in-line with the intended direction of strain. The individual wires are splayed out inside the cone, and the cone is then filled with molten zinc, or now more commonly, an epoxy resin compound. http://www.escocorp.com/markets/rigging/socketfast.html

An eye splice may be used to terminate the loose end of a wire rope when forming a loop. The strands of the end of a wire rope are unwound a certain distance, and plaited back into the wire rope, forming the loop, or an eye, called an eye splice. When this type of rope splice is used specifically on wire rope, it is called a "Molly Hogan", and, by some, a "Dutch" eye instead of a "Flemish" eye.

In tension structures, the guy cable is a steel cable used to support the structural integrity of the steel frame. It may be attached at the ends of the steel struts (or “arms”) to hold them together and resist them from movement relative to each other. Unlike catenary cables, the lengths are calculated by a straight point-to-point dimension. The engineer will need to determine the thickness by calculating the maximum stress on the cable.

A cable fitting is a device attached to the end of a cable to allow a connection to another member. Fittings can be swaged, speltered or compression type. The boss plate is a doughnut-shaped plate attached to a cable ear plate to reinforce the pinhole and allow a thinner plate.

A stay cable is a steel cable that is used to stabilize the mast in response to the forces created by wind loads. The stay cables are used to resist movement of the structure relative to the earth. One end of the cable will typically connect to the end of the steel frame near the fabric connection. The other end will terminate to a sturdy section of the mast or a footing in the ground. Footing is the large concrete anchoring structure that holds a tension structure securely to the ground. The top of the footing is typically flush with the ground level. The footing is comprised of a matrix of steel rebar that is referred to as a cage. The concrete is poured into the hole in the ground that holds the cage. The anchor bolts get placed into the top of the footing at their precise location as indicated in the shop drawings. A certified engineer must calculate the size of the footings. The size of the footing must contain enough weight to hold down the tension structure for the wind loads in the area.

A catenary is the curve theoretically formed by a perfectly flexible, uniformly dense, inextensible “cable” suspended from each of two end points. In fabric structures experience, this shape is probably not ever truly developed, but is commonly used to describe the shape developed at the boundary of a uniformly stressed fabric structure attached to a cable which is restrained only at its end points.

A catenary edge is a method of securing the edge of a panel with a cable tensioned between two fixed points.

Retrieved from "https://tensegritywiki.com/w/index.php?title=Wire_Roap&oldid=1424"
Categories:
Cookies help us deliver our services. By using our services, you agree to our use of cookies.